After Mark Wilson-Thomas, the Program Manager on the WPF Designer team responded to my post about my WPF issues, I thought I owed it a second chance having read his comments.

My first issue was with the control drop-down being removed. Mark pointed out a few alternatives like the Document Outline window and the XAML Path control. The Document Outline seems to work pretty well, though I'm still not covinced I'll get along with it. Usually when I'm heading for the old drop-down at the top of the property grid, it's because I need to select something I can't easily select in the designer (menu items, controls that are dynamically hidden/shown etc.), and I usually have the name of them in my head. That makes an alphabetical list much quicker than a tree. I know what the item is likely to be called, but not necessarily how it's embedded in a huge tree of SplitPanels. I've also noticed a few minor issues as you can see in my screenshot.

The tree is a bit flat, and not very tree-like, so it's not easy at a glance to see the hierarchy. While this might not seem like a big deal since the drop-down I love was flat, but since the items aren't sorted alphabetically now, it can be a little tricky to find your item. Though this might get easier the more I use it! The other issue is that the small preview appears squashed sometime. I'm not sure if this is a bug, or if it's by design, but the button shown in mine doesn't quite look like the actual button on the form. 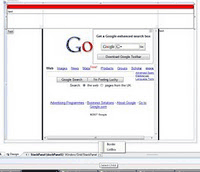 The XAML tree is pretty nifty, though a little fiddly to use. You can very easily select a parent of the currently selected item, and an arrow (" /> ") list children. While this is pretty powerful, since it only deals with parents/children, it's probably more likely you'll get into the habit of using the Document Outline instead.

Mark pointed me at Chuck Sterling's blog showing new intellisense that can add event handlers. I'm still not convinced this is as nice as being able to easily see a filtered list of events, it's a nice addition. This would be much more friendly if there was a quick way to filter the intellisense to just list events (though I suspect there won't be).

Mark hinted at "a better way of locating the properties in the property grid before we ship" which I suspect might be live filtering of properties like in some of the Expression tools (a search box, that hides properties that don't match what you're typing). Withing seeing it, I can't say whether it'll be as natural as looking for properties based on what letter they start with, but I'll post my thoughts when if and when I see it.

As for the rending issues, I managed to get a screenshot of the kind of thing I'm seeing. This particular issue shows up when I hit "Swap Panes" to replace the XAML with the Design view. It always renders the hosted WebBrowser control, but nothing around it. When I click anywhere on the surface, everything else appears.

Here's screenshots showing what's displayed after clicking the "Swap Panes" button and the expected view (which happens when I switch to XAML then back to Designer normally). 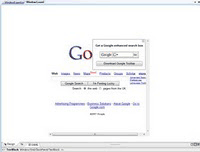 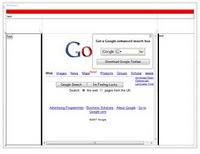