My Week in a Tesla Model S P85

9 months ago my wife and I took delivery of two Renault ZOEs. We hadn’t had EVs before but after test driving a ZOE and being offered a great deal on two we found it hard to turn down! Although the range of the ZOE is only 70-100 miles (depending on weather, etc.) we’ve had no problems using the ZOE for a summer holiday racking up over a thousand miles in a week, including two 270 mile trips to/from the holiday park. Neither of us would willingly go back to combustion cars.

In August, Chargemaster Plc (who made the chargepoint we have at home and also run the POLAR charging network) launched a new scheme called “POLAR Plus” which rewarded customers for charging on their network with points which could be used to “bid” for a weeks use of one of their fleet of electric vehicles (including a Tesla Model S and a BMW i8!). The number of points needed to loan the Tesla Model S was only 70 (which is just 7 qualifying charge sessions). I was sceptical but they assured me all was as it seemed. The scheme costs £7.85 per month but the first six months are free.

Fast forward to November and it happened, my week in Chargemaster’s Tesla Model S P85 was confirmed, 8th - 14th December! At this time I’m still in my free 6-month trial so I’ve paid £0 to Chargemaster! :) 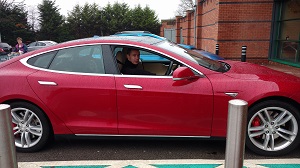 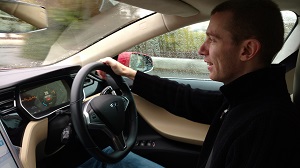 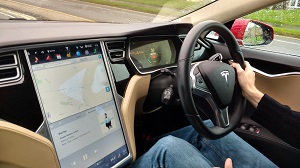 I picked up the car from Chargemaster’s head office in Luton on Tuesday 8th Dec. At more than twice the price of the most expensive car I’ve owned I was expecting it to be great but it still seriously exceeded my expectations. I wanted one from the minute I sat inside it! Evie (an apt name) from Chargemaster ran me through some paperwork and the basics of the Model S and we were soon on our way home. It should be a 3-4hr journey back to where we live in Cheshire but with terrible traffic and a stop at Warrington to try out the Supercharger it took approximately 5hrs driving (mostly in the dark and rain) to get home.

I’d already seen pictures/videos of the Model S but it looked much better than I expected up-close. If you’re used to spending this sort of money on a car you may be used to having cars that look this nice but sadly, I am not! It looked stunning and it was pretty huge (especially compared to the ZOE which is quite tiny). 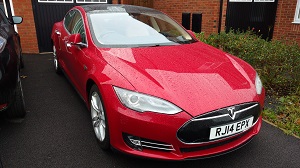 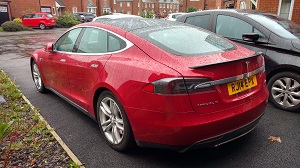 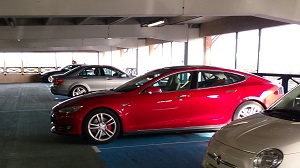 This Model S was a P85. This is the rear-wheel-drive “performance” version (the all-wheel-drive performance version is the P85D). It’s not available in this configuration anymore but I believe the 0-60 time is something like 4.1 seconds. To me, this qualifies as “stupidly fast”. For various reasons (public roads, very wet week, it’s not my car and being somewhat scared of the performance I did experience) I didn’t get to experience how fast this thing would accelerate foot-to-the-floor but it was quite clear from just a little bit of “fun” I had that the power in this car is utterly ridiculous. I’ve never driven a RWD car before and feeling the back end twitching in the wet is scary. If I somehow ended up with the money to buy one of these I think I’d opt for the “D” version just to avoid that danger! :D

Inside, the Model S feels expensive. With a few exceptions (the plastic on the front of the arm rest rattled a little and felt a bit cheap) everything feels very premium and well-made. There’s nice stitched leather around the dash and the leather seats are very comfortable. As there’s no handbrake/gear-selector between the front seats, everything is very open and spacious. The back easily accommodates adults with decent legroom and was big enough that the kids couldn’t reach to kick the back of the seat. Bonus! 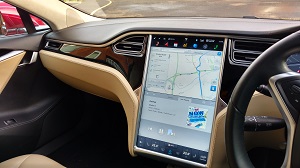 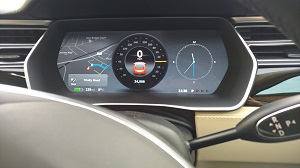 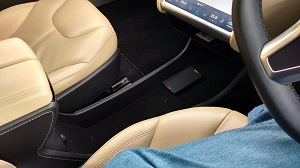 The thing that is always a huge disappointment in cars I’ve owned is the software. Every time I get a new car I think “software must’ve moved on, it’ll be good now”, but no. The Model S bucks this trend and has excellent software on an enormous 17” touch screen front-centre. Rather than hardware dials/knobs that can’t be changed (and can break) the Model S does almost everything in software from this same touchscreen. My wife initially said the touchscreen was “too big” but I think she was coming around to it by the end of the week. It has Google Maps-based navigation, the reversing camera, calendar, Bluetooth/music/radio, consumption graphs and everything else you can think of all together in one place. All the settings you might like to tweak (regen, creep, suspension/ride height, sunroof, charge timer, automatic lights etc.) are all controlled here. Whereas many cars feel like a Frankenstein of disparate systems “integrated” together, everything here feels like it was built as one.

The excellent software extends to the display behind the steering wheel which shows a small version of the navigation map (when navigating) so you can keep your eyes directly ahead.

Although it’s not very deep, the boot is rather large and easily fit our pushchair, coats and plenty of shopping. There’s also a really decent amount of storage under the bonnet (“frunk”/”front trunk”) that could easily fit all of our shopping in it and would be less likely to roll around than in the boot. 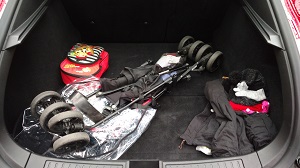 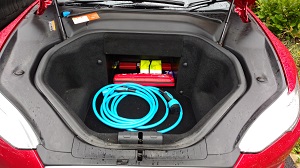 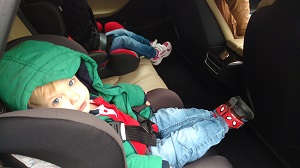 When I picked the car up the regen braking was set to “Low”. I switched it to “Standard” as I was quite used to regen braking in the ZOE and liked minimising the use of the brake pedal. I was surprised at just how aggressive “Standard” was and found myself having to put my foot back on the gas after lifting off many times while I got used to it. Once I got the hang of it, it was absolutely brilliant - I previously thought I didn’t use the brake pedal much in the ZOE but this was just miles better. One-pedal-driving is great!

On one of the days it was around 5 degrees Celsius. I noticed the regen braking wasn’t anywhere near as effective (it caught me by surprise) and I noticed the speedo showed a dotted line in the regen area which indicates that it can’t regen/charge at the normal rate. It was a little weird that the cold weather was changing the driving experience so much but after just a little driving/braking it seemed to have warmed up enough for this to go away and things were back to normal.

The Model S comes with a bunch of nice things/gadgets, many of which aren’t unique to the Model S (or even EVs) but they still added to the experience.

With the exception of the rear view mirror all adjustments are electric (seats, wing mirrors and even steering wheel adjustment) and saved against your driver profile. If someone else drives the car, selecting your profile afterwards will move everything back to how you had it.

The wing mirrors automatically angle downwards when you shift into reverse to help you see white lines or parking spaces on the road (and return when you shift out of reverse).

The reversing camera is far higher definition than the car in our ZOE and shows on the huge screen making it really easy to reverse-park (which is super useful because forwards parking is tricky when you don’t really know how big the car is and are unable to see the front corners!).

Front seats are heated. I’ve never cared much for these in the past but with the cold weather they were really nice! Something small but I liked, was that when you turned them on they defaulted to the highest setting and reduced as you continue to tap the button. This matches how you’d use them pretty well (it’s cold, put them on full then reduce over time) so you don’t have to keep tapping to increase the heat when you turn them on. Unfortunately there was no heated steering wheel to go with it and the wheel was often quite cold so I found myself driving around all toasty and warm but with cold hands!

The key for the car is a miniature Model S. Pressing the front opens the frunk, the back opens the boot and the middle opens the car. It’s a nice touch and looks pretty cool.

When I was returning the car I entered the business park and the car showed a message along the lines of “Increasing ride height based on location”. I don’t know how this had been set up, but due to speed bumps the ride height was increased! 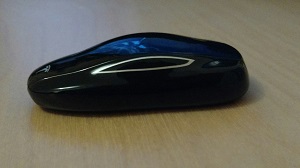 There really aren’t many things we didn’t like about the Model S, it really is an excellent car. There are a couple of niggles or things I think could be improved though:

Everybody that I took out in the Model S seemed to love it. Even the people that previously weren’t entirely sold on current-gen EVs (for various reasons) like my parents loved it. My mum (who doesn’t really care about cars) text me saying “it’s ace” and I think if my dad could possibly make the numbers work out he would place his order today. We definitely convinced a bunch more people this week that EVs can be great and that it’s undoubtedly not a fad that’s going to disappear.

It was a great experience driving the Model S for a week and I’m really grateful to Chargemaster for making it happen. It’s expected that the Model 3 may be released before we plan to return our ZOEs at the end of their PCP term and may only cost £30,000 so I’ll be keeping a close eye on that and what government incentives we have at the time. Chargemaster told me they’ve ordered their Model X and it will be added to the EV Experience scheme when it arrives (expected late Q2/early Q3 2016).

If I ever find myself with £80,000 to spend on a new car, I know what will be top of the shopping list. In the meantime, I guess I’m stuck with the ZOE (except for if/when I’m able to borrow more cars from Chargemaster!).

Going Back to the ZOE

Today I got to do my commute back in the ZOE. It was an interesting change! The ZOE seating position is much higher (despite the Model S also having batteries along the bottom) and the car feels like it has a much higher centre of gravity. The reversing camera is a tiny low-definition mess. The weak regen braking caught me out a few times and I found myself having to hit the brakes while I got used to it. Although the ZOE felt fast compared to my previous petrol car (a 1.6 petrol Megane) it feels really slow compared the Model S and the accelerator is (unsurprisingly) just nowhere near as responsive.

All that said, once I got used to driving the ZOE again towards the end of my commute, I was reminded how fun it was. Driving the really Model S hasn’t changed that and I still arrived at work with a big grin on my face!