I found a ridiculous bug in YouTube and seem unable to successfully report it :(

Last week a colleague tweeted me telling me that the hyperlinks in the descriptions of my kids review of the Echo Dot were giving 404s. This surprised me because I’d clicked them to ensure they worked after publishing the video! I probed him and he sent a screenshot of 404s. I checked them again myself both on desktop and my mobile and everything was fine. Since this colleague has a certain sense of humour, I figured he was trying to wind me up and didn’t think much of it.

The next day he showed me the issue on his mobile phone - he was right - the links had been truncated! WTF? I noticed that when he clicked YouTube links in twitter they were opening in Chrome, not the YouTube app. I tried the same thing on my mobile and was immediately able to reproduce the issue. I did some Googling and found reports of a bug in 2013 that sounded similar. I dug into this and discovered that this wasn’t the same issue - that was an issue with the inline editor truncating links when editing; my links were fine in the editor and on desktop/mobile. This is a different bug. The YouTube mobile site is truncating links not just for the display but the actual URL the user is taken to. Whaaaaa?

You might think “Who uses the mobile site anyway? Just Windows Phone users?” but the colleague that reported it to me has an Android phone that came pre-installed with the YouTube app, yet clicking YT links in Twitter opens the mobile web version. Lots of promotion of YouTube videos is done on Twitter and other social media so the number of people hitting this bug is probably not insignificant. Probably they assume the video creator is a muppet rather than a YouTube bug.

I did some more Googling and could not find a single report of this bug online! I’m surprised that a bug with links being truncated for a large number of people (if only 1% of YouTube traffic is mobile web, that’s still huge) can go unnoticed.

I decided to check it wasn’t just me so I opened up some videos from popular YouTubers I follow… Casey Neistat… Same thing. 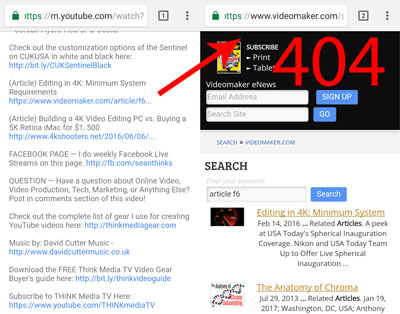 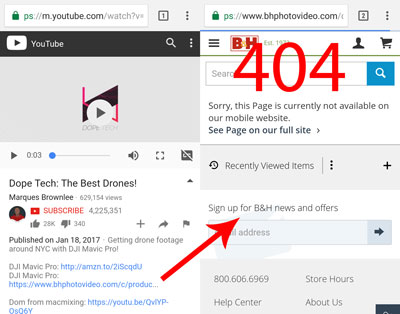 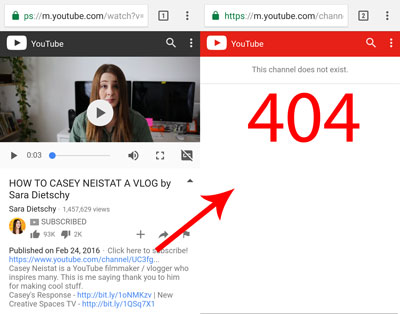 WTF YouTube? Where is the testing? Have we given up?.

So, I did what I always do when I find a bug. I tried to report it. Quite a few times…

The only workaround for this bug that I know of is to shorten all your links. I hate this because it looks scummy like you’re trying to hide something. I created my own short links for the Review Kidz videos for now that hopefully makes it clearer where they go than goo.gl but it’s not a great solution.

So, this blog post is my final attempt to get someone from YouTube/Google to see this so they might consider fixing this (IMO completely ridiculous) bug. I’d rather not have to shorten links because of this but it’s looking like that’s how it’s going to be. It’s amazing both that a product as large as YouTube can have so many broken links and apparently nobody has noticed and that there’s very little information on how to report bugs or get their attention (though honestly, this seems par for the course with Google these days; support is simply nonexistent).